Project Reveal: Jewelry for my Seestar

So I've been working on several projects lately but couldn't share what they were or the progress as they were to be presents for my sister. Now that I've given her three of the four presents and shown her the in-progress fourth, I can share them here!

One of the first things I discovered on Pinterest was this cute necklace made from a thimble and pearl-headed pins. I liked how it turned out but was nervous it wouldn't be in my sister's taste. Joann's was having a 50% off notions sale just when I was ready to start this project so I stocked up on thimbles and bought two different brands of pearlized pins because they had different shades. The only thing I did differently from the tutorial in the link was that I used wire cutters to trim the lengths of pins as they stood too tall from my thimble. In order to get varying heights, I would have had to pull them up even higher from the thimble bottom and it would have been more unbalanced.

For the second necklace, I used some of my sister's own art without her permission. However, since it was a gift for her, I was sure she wouldn't mind (and she didn't). This was my third idea but actually turned out my favorite of the three...probably because I love my sister's painting style.

I started with a 1" wood disk from the craft store and painted it completely white. I resized my sister's picture to fit and used a 1" hole punch. Using a little craft glue, I attached the picture to one side of the wooden disk and then brushed a thin layer of glue on top to protect the ink. Then I covered the entire top with a thick layer of Diamond Glaze and let it dry over night. One note, I try to smear a little of the glaze around the side edges as well to give a more finished look. Using my Dremel, I drilled a small diagonal hole from the back to come out through the side (and not mar the front). I attached a jump ring and then decided to add a little more whimsy. I took some thin silvery-white wire and twisted it into little curlicues. I put a dot of glue in the bottom seed bead to help hold it on the end and then threaded more beads (pearlescent white and clear over a silver core). I found this great little button in my crafting supplies and decided it could look easily like a snowflake. Ta-Da!

My third necklace turned out the least exciting even though it was my first idea. I wanted to make a colorwheel. I took the same 1" diameter wooden disk (several come in a package) and painted several coats of white on it. Next, I took some artist's tape and cut a very thin strip which I broke into several lengths. I arrayed them on the disk to create wedge shapes and painted them in with the 6 primary and secondary colors. 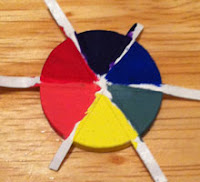 However, when I took the strips off, the edges still had bled a little and were uneven. (My red paint was more watery than the rest.) I also didn't like the stark white lines as it made it feel more like a Trivial Pursuit game piece. 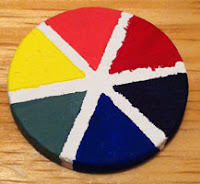 I decided to do thin strips of the tertiary colors to cover up the white, but what to do in the center? From a paint perspective, where all the colors mix is black, but I didn't like the idea of a black dot in the middle. Instead I repainted a little white dot there. I thoroughly coated with Diamond Glaze and after it had dried for a few minutes, I carefully dropped a Swarovski Elements 3MM AB Hot Fix crystal in the center. I didn't want to apply it under the glaze as I figured it would dull the sparkle. The next day, I used my Dremel to do a diagonal hole like for the snowman and added the jump ring. 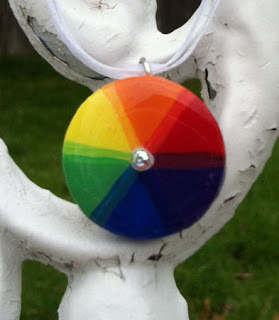 Overall, I like it although it isn't as "cute" as the other two necklaces. I wasn't happy with the shade of purple but oddly, even though I painted over it several times with lighter shades, it stubbornly remained dark. Also, that ribbon I used looks white in this light and pale lavender in other lights. I wish it were a more obvious lavender/purple as that color represents creativity and inspiration.
Posted by Adventures in Anderland at 2:56 PM